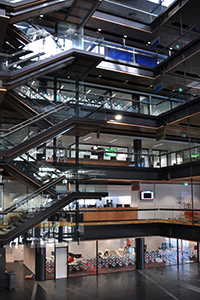 The problem with multi-level buildings is that they often need to allow for some floor movement, and often there is no allowance made for this movement in many partition/wall systems.

The architect, from Warren & Mahoney, was very interested to learn of the DF Series 105, which has been designed to help with exposed full height aluminium partitions in modern office designs, which tend not to have a traditional panel ceiling.

The new Potters deflection system is available for both 64mm and 92mm stud sizes, consists of four components (including head track), and is very easily installed. When installed (set in the neutral position) this will allow for +/- 25mm deflection, preventing the possibilities of:

This movement not only causes irreversible damage to partition wall/components but can greatly effect human safety – especially in the event of a natural disaster – when people try to escape an affected building.

An added benefit of the Potters deflection head track system is that it also creates an ‘acoustic separation’ between upper and lower levels, greatly reducing noise and vibrations from transferring down through the partition walls.

The DF Series system can also be used as a base build wall starter (when installed vertically), which will allow some movement between existing structures and internal partitions.

Projects where the DF Series has been installed include: